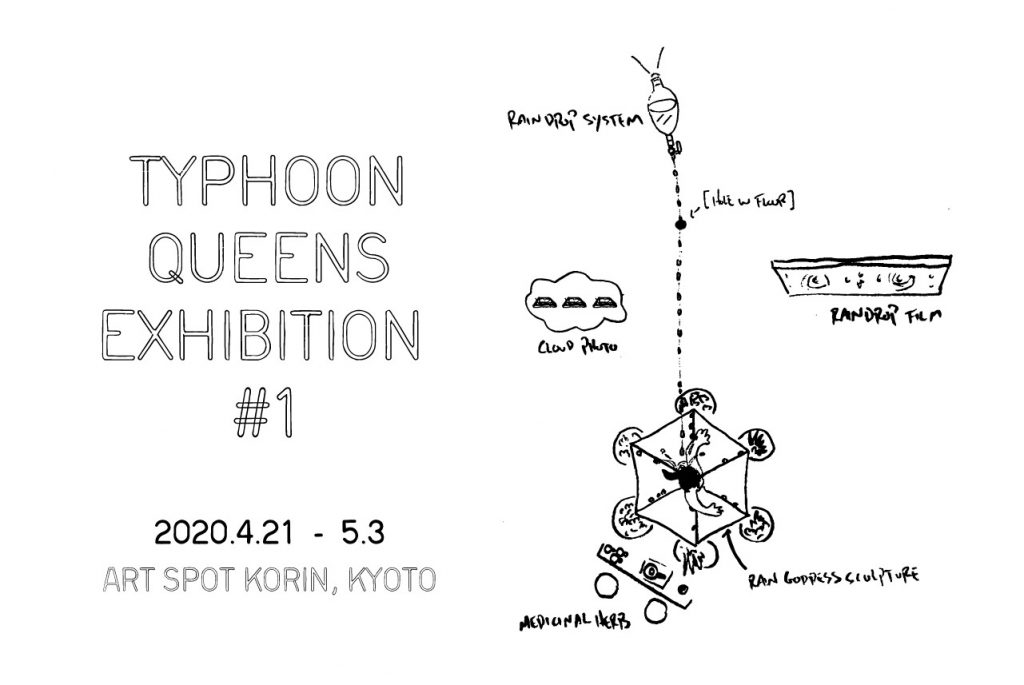 The Typhoon Queens are an ecological artist collective formed in 2019 during a typhoon, while exhibiting together at the City as Nature Festival, an international environmental arts festival in Kitakagaya (Osaka, Japan). Their work is part exhibition, part experiential story. Combining physical works, stories, sound, moving image, and performance, they form spaces where social, political, and ecological icons give way to nature’s own hints, habits, sign posts, and world with potential for re-imagining everything. As of April 2020, members come from Japan, Korea, Saudi Arabia, and the United States.

Social, political, and ecological strain between countries at times like a lyrical play, where humans and nature rotate characters as moderator, observer, and instigator. Together, five artists from Japan, Korea, and the United States (known as the Typhoon Queens) propose an orchestration of alternate views on these deep-rooted struggles, asking: can nature show us the way?

Clouds are our origin
Rain is their transformation
A human figure in umbrella skirt embodies transformational cultures, colors, races,
The herb garden beneath is the place that our future will regenerate

Beginning with clouds floating between Korea and Japan, melting rain ripples with light and sound, and a garden of healing herbs is born. In this interactive exhibition of film, photography, sculpture, and performance, we reconsider the boundaries and cycles of this world that is born and interpreted in each society and culture.

This exhibition is a satellite event of Kyotographie KG+ 2020. Parts of this exhibition will further be exhibited this Autumn in the United States, as part of “The State We’re In: Water” at the Oklahoma State Museum of Art.

The City as Nature Festival was an international environmental arts festival in Kitakagaya Creative Village. Featuring exhibitions, workshops, talks, and concerts, the festival was supported by Chishima Foundation for Creative Osaka, The Nature of Cities (New York), San Jose State University, and The Branch Osaka.

The festival was organized by Patrick M. Lydon and Suhee Kang, and included the exhibition “Water: Multi-Species Migration and Displacement” by American artists Robin Lasser and Marguerite Perret. Overall, the festival included works by all Typhoon Queens, as well as nearly 30 other artists from around the world working with water and environmental themes.