The following photo essay was co-produced with Final Straw: Food, Earth, Happiness. It is based on talks, interviews, and time spent planting and harvesting rice over the span of a year with chef Ga Young Seok in South Korea.

Two years ago now, my partner and I twice visited a natural rice farm in Hongcheon, South Korea to film footage of the field during planting time, and again at harvest time. On both of these outings we were accompanied by a chef named Ga Young, who was at the time, working at a rather fancy French restaurant in Seoul.

I remember planting rice next to Ga Young her first time at the field and she wore a look of innocent amazement as she worked, ever so gently pressing the tiny rice seedlings into the mud, one by one. We chatted about many things while we worked, but what struck me the most was her perspective of this experience, as someone who works with food for a living. 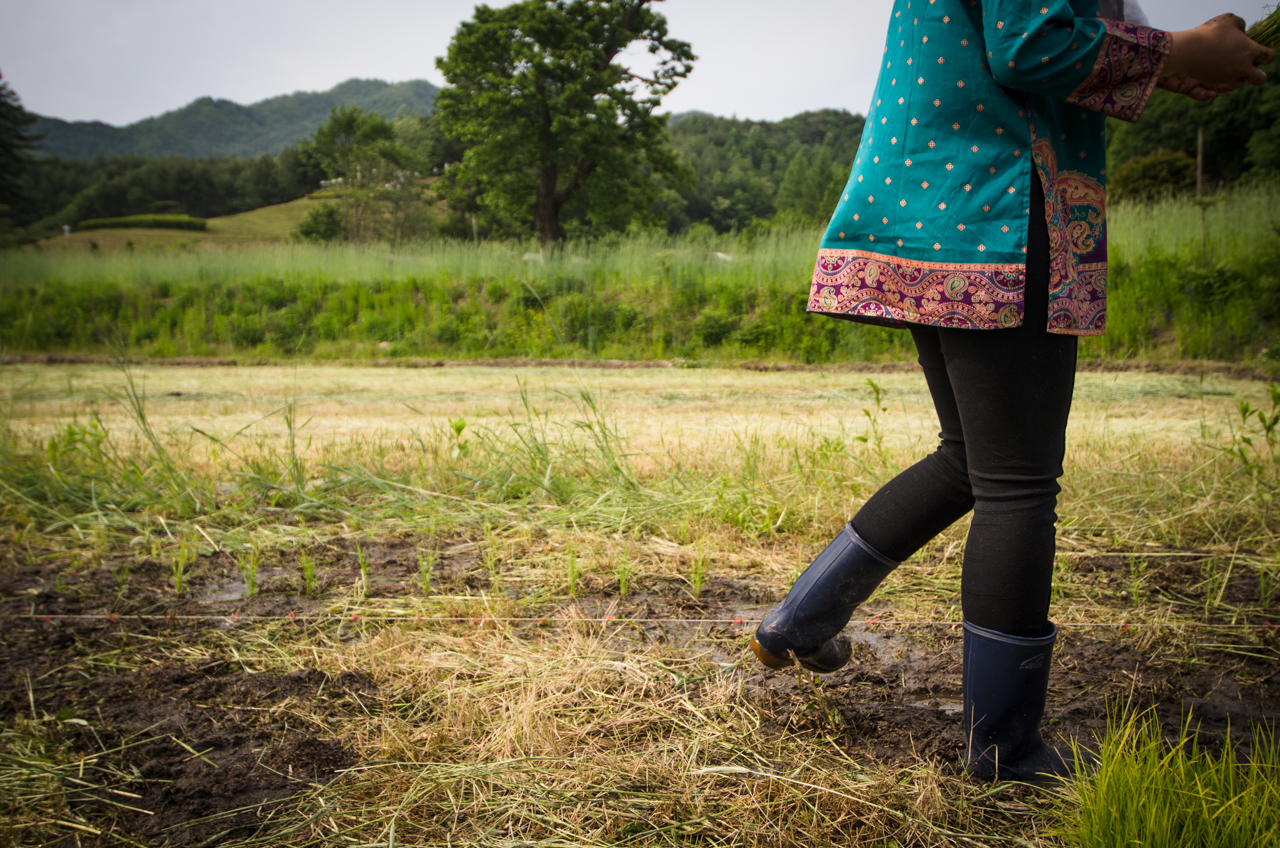 Ga Young was suddenly totally immersed and connected in an entirely new way to the source of the food which she had spent much of her life learning how to prepare.

As a chef, Ga Young had never experienced work like this before, offering such a closeness to the food which she handled day in and day out. Many of the world’s best chefs make it a point to visit the farms where their produce comes from, but the act of physically farming takes it another level.

And then, even if you’ve taken part in the act of ‘farming’ as we know it, you almost certainly haven’t visited this kind of rice farm.

The rice farm in Hongcheon goes by the Natural Farming way of ‘farm with nature’ which means no pesticide, no herbicide, and plenty of weeds, bugs, and insects of all kinds present and welcome on the field as a result.

It also means no machines.

Everything is done by human power. This is rare; almost no one plants and harvests rice by hand these days, not even on the smallest of organic farms. 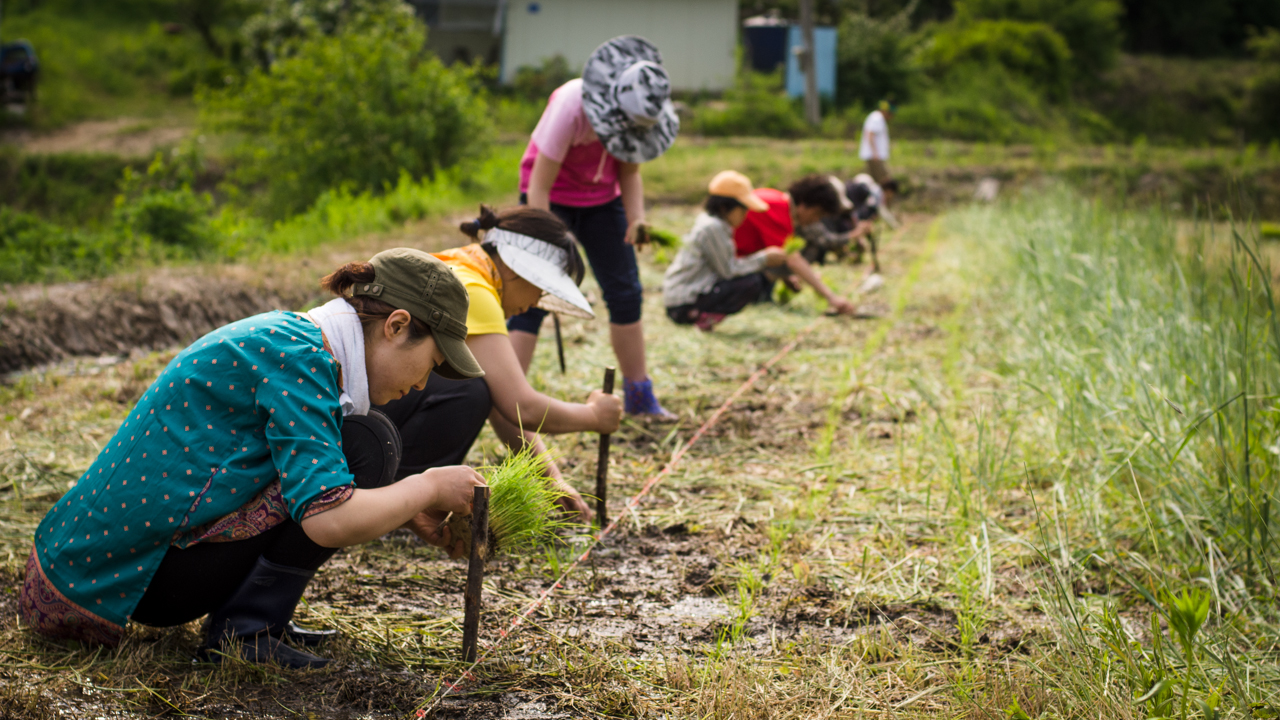 So the act of putting your fingers into the mud, repeatedly planting hundreds of rice seedlings each hour, dawn to dusk for a few days is a rare experience to have; and it seemed like a revelation to Ga Young.

She was suddenly totally immersed and connected in an entirely new way to the source of the food which she had spent much of her life learning how to prepare. The experience transferred to her face a look of child-like elation.

At some point during our planting time, she removed her boots, opting to have her toes wiggle in the mud. I followed suit, toes in the mud, planting rice, two faces of child-like elation pasted on. 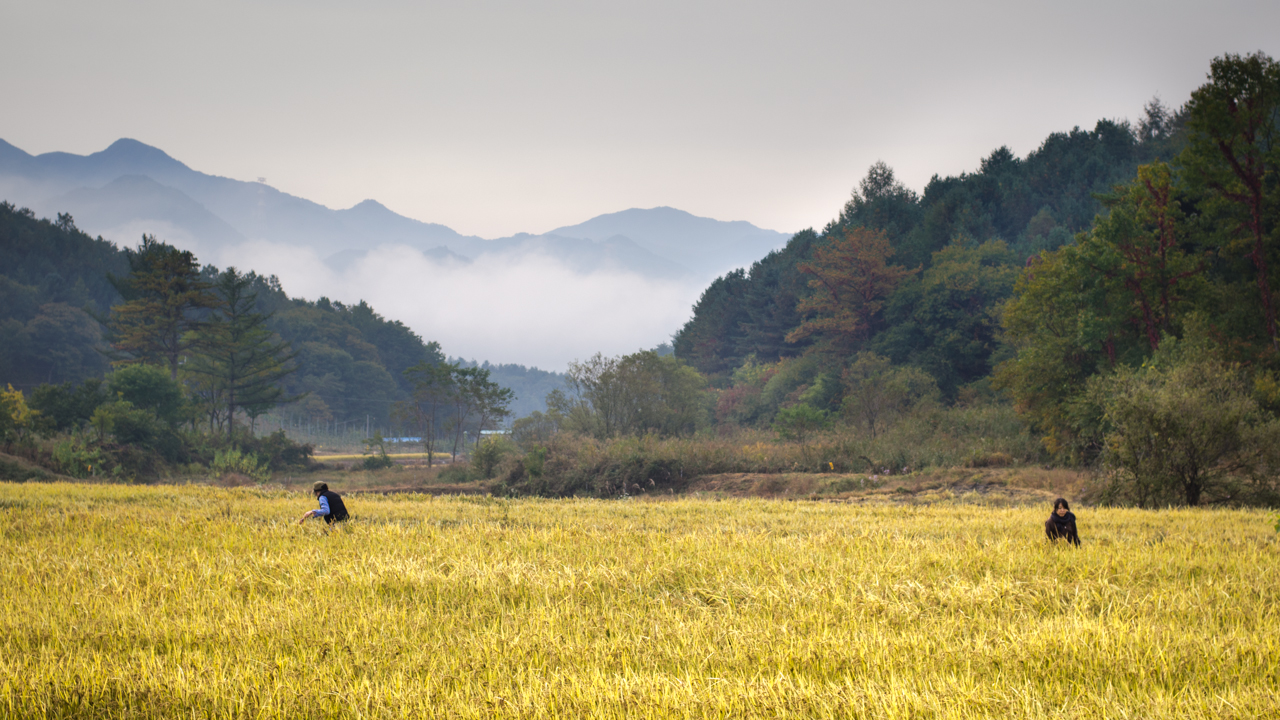 Later in the year, we all returned to the same field again to see the progress of the baby seedlings we had planted. We were greeted by a bright and lush golden field, teeming with life and millions of grains of rice.

And again over the course of a few days, along with a dozen or so others from the surrounding area, we took part in harvesting the rice in the same manner as we had planted it, all by hand and human-power. It was an experience of connecting, not only to the soil, food, bugs, and nature, but also to other people.

With the cycle of a growing season behind us, we all closed the weekend out by sitting on the field, playing music, and having a few drinks of traditional Korean rice wine with the group, and most importantly in giving thanks to the land from which the rice had grown.

It was a true full circle experience.

Rice Balls from a Bike

Back in Seoul, Ga Young had always been curious about the possibility of incorporating more sustainable and local choices in the menu of the French restaurant where she was working, and her visits to the natural rice farm seemed to instill an even stronger desire for this.

Yet while ‘sustainable’ and ‘local’ are big buzzwords in the restaurant industry, in practice these are rarely the aim. That is to say, producing local menus can be both time-consuming and expensive and even the most well-intentioned restaurants feel immense pressure to bend their dedication to sustainability in the name of profit and ease of procurement. From the looks of the industry, it doesn’t seem easy to make a truly sustainable and local restaurant operation work.

Not only this, but Ga Young found that the typical style of working tucked away in a kitchen, preparing food for large dining rooms full of people each night wasn’t particularly suited to her personal needs — needs which now more than ever included being connected to her customers in a meaningful way.

With these realities looming into the foreseeable future, and with little ability as an employee to change the restaurant where she worked, Ga Young made the choice to leave and start her own.

What she held in passion however, was not exactly met with capital to invest. Ga Young started small with her new operation. 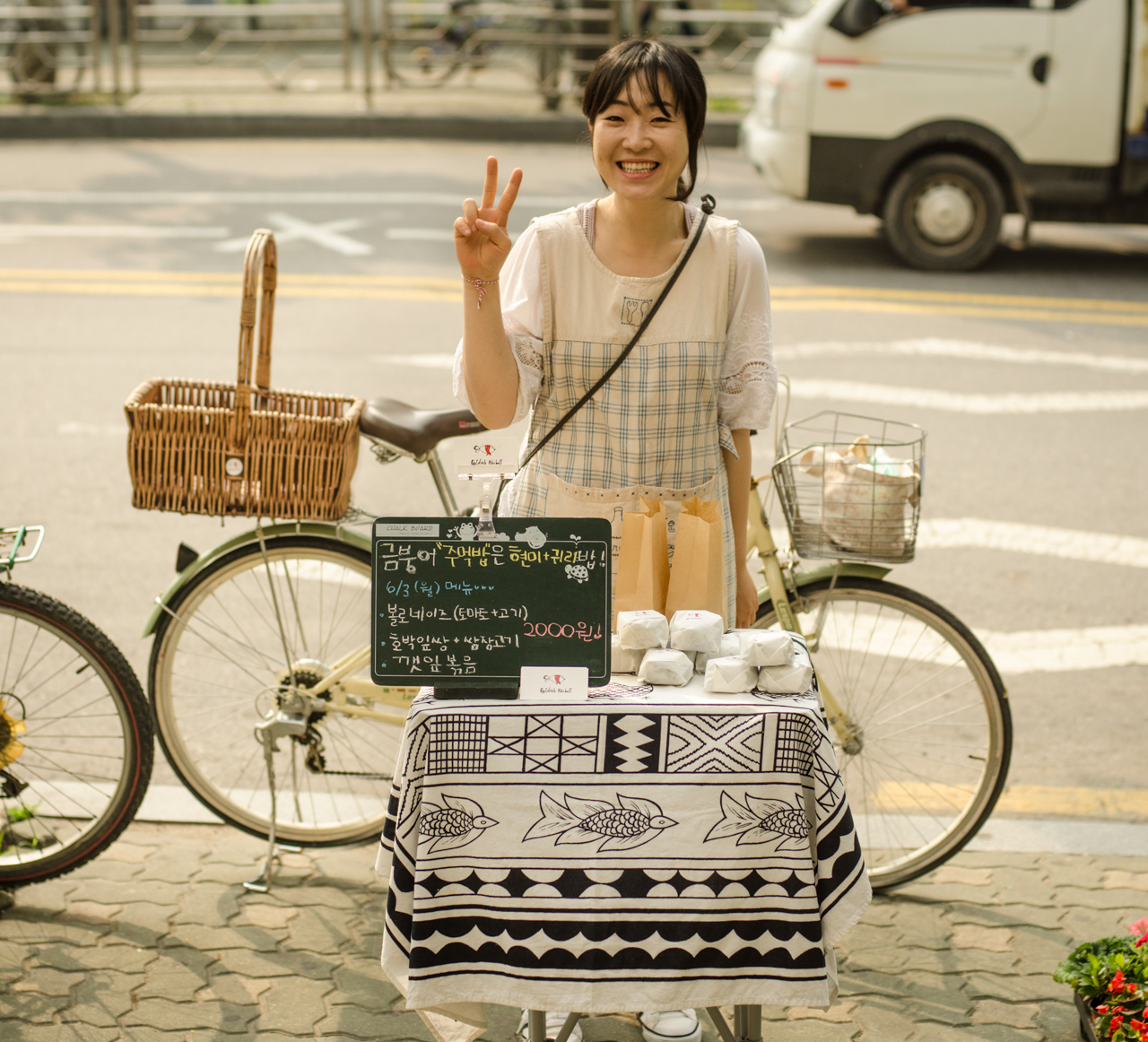 We met Ga Young again shortly after her full circle rice farming experience, and she had turned to pedal power, selling handmade rice balls (a common quick lunchtime food in Korea) from a bicycle.

She named the operation ‘Goldfish‘ (금붕어).

But even at the onset of her new venture, and after a decade of working alongside some of the most respected chefs in New York City and Seoul, GaYoung still had doubts about her own abilities. “I didn’t know if people would like what I was making, and I didn’t trust in myself at first” she told me.

At her previous jobs, customers paid a lot for the food that she was making, but, she laments “I never was able to personally ask them if they liked my food… there’s a big distance between the customer and the chefs.”

GaYoung’s bicycle-based operation was an obvious — and frankly pretty radical — way for her to remove the distance between chef and customer, and with it, the doubts which she was having also began to disappear. “People came, they bought my rice balls, they came back for more … I thought, okay, this is going to be okay.”

It was more than just ‘ok’ however; the rice balls found an audience quickly, and about six months later GaYoung was working on moving from a bicycle to opening her own small restaurant.

Small is Beautiful, a Pint-Sized Restaurant

With a total of eleven seats, GaYoung’s Goldfish restaurant — no, they don’t actually have goldfish on the menu — is tucked anonymously into the quiet Mangwon district of Seoul. So anonymously in fact, that as she was preparing for her opening, neighbors would stop by to tell her she needed better signage if she wanted to attract customers “that little goldfish is the sign?” they remarked “how can anyone tell it’s a restaurant!?”

Ga Young was not dissuaded from her position however, and the shop remains tiny, cozy, personal, and all just about the right fit for her aims as an entrepreneur. 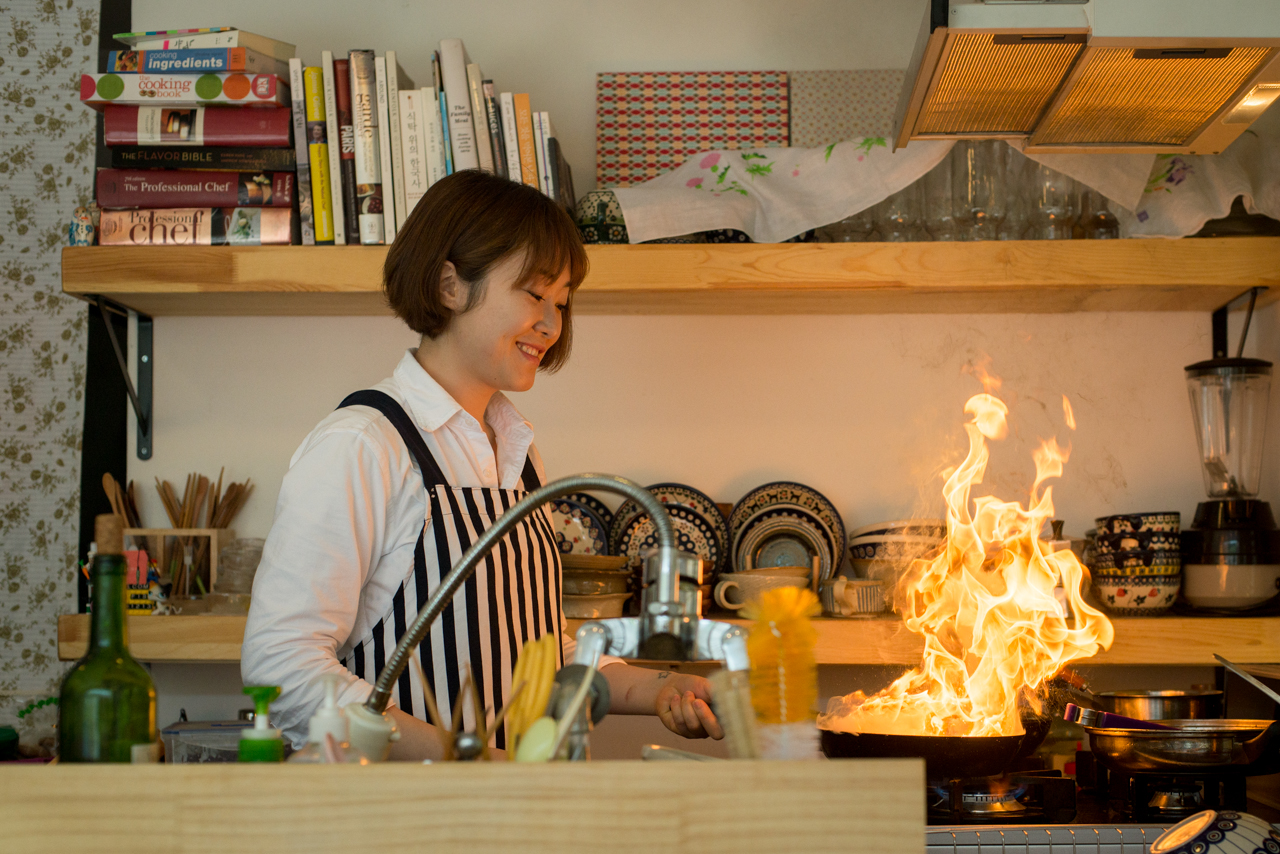 No longer stuck in a kitchen tucked away from customers, Ga Young prepares every plate one by one just a few feet — or a few inches — from you, depending on where you are sitting. The day we visited, she asked if we like fire and treated us to a little flame show… careful if you have a big beard!

Along with the small scale, Ga Young is able to put focus on relationships, and to have meaningful interaction, conversation, and rapport with her customers, a goal she admits would be impossible if she had a larger restaurant.

She sells one menu each day (on the day we visited it was a beautiful salmon rice bowl) and when the small amount of ingredients she buys for that menu are sold out, the shop closes up for the day.

Her concentration on relationship is also present in how she deals with the individuals who provide her with daily ingredients. “Relationship is most important” says Ga Young, “when I buy the food for the restaurant, I need to have personal relationships and trust with the producers I work with, too.”

It is obvious in this 20-million person metropolis of Seoul, that Ga Young’s aims as a business owner are distinctly different from the aims of most of her competitors. 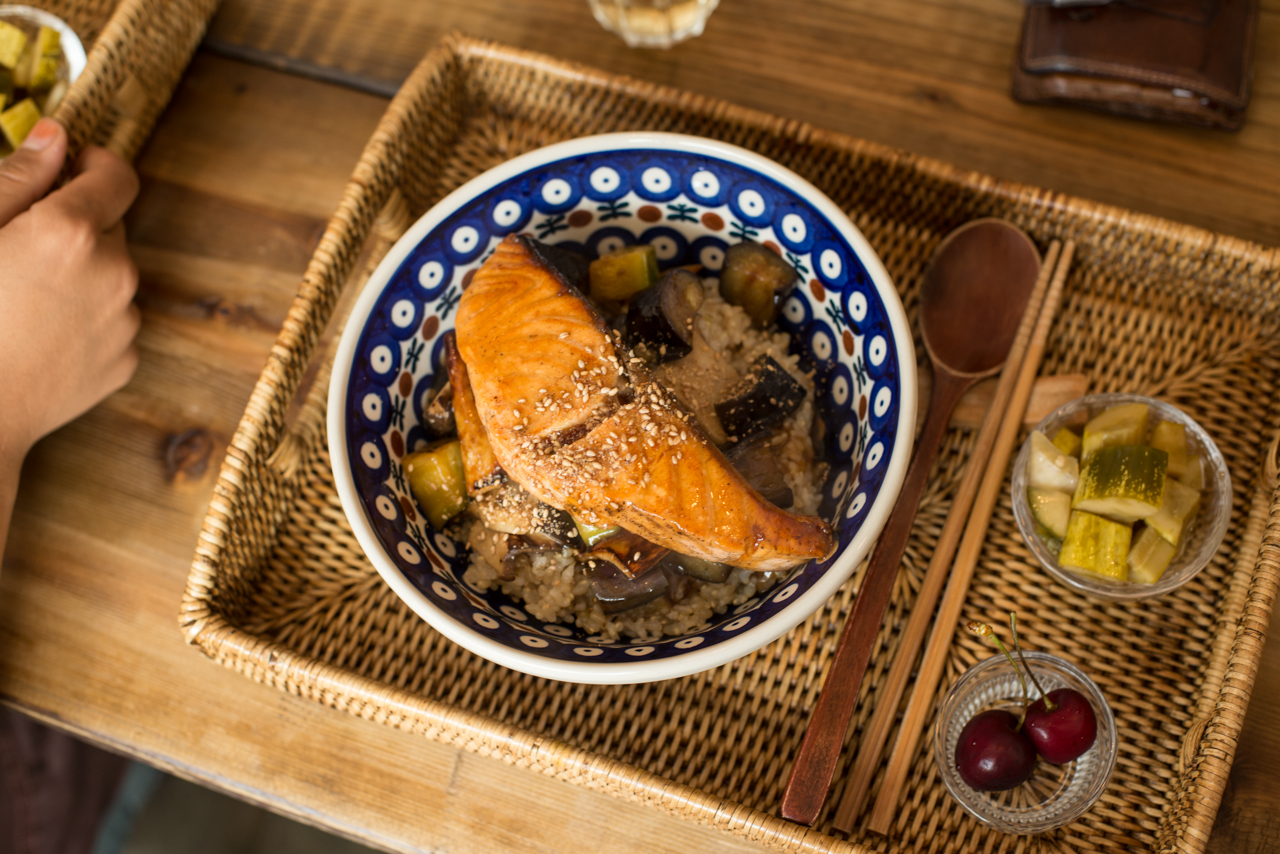 Sit in this tiny restaurant for a while, and you’ll notice that the real importance of Ga Young’s job is that she approaches it with the aims of nourishing people with good food, nourishing relationships between herself and other individuals who stop by for this good food, and having a good time while she is at it.

That sounds like a pretty simple recipe for something good.

Such a mindset as Ga Young’s instills great hope in someone like me. It offers a feeling that such a transition in life is possible for anyone, as long as we are also willing and dedicated to nourishing our relationships – with people, with ourselves, and maybe even, with a rice field.

Patrick M. Lydon is an American ecological writer and lens-based artist living in Japan. He is founder of City as Nature, and arts editor at The Nature of Cities (New York). @pmlydon 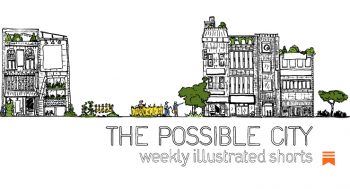 Stories and images from Kitakagaya, an old Osaka neighborhood with little money, yet a wealth of strange, beautiful, and useful ways of approaching life, work, …

Nothing much of interest to GDP or the stock market ever happens in Urugi Village. Yet there is an unexpectedly resilient human ecosystem here. What …
Tags: chef, cooking, farming, field, Food, korea, local, nature, relationships, restaurant, rice, seoul